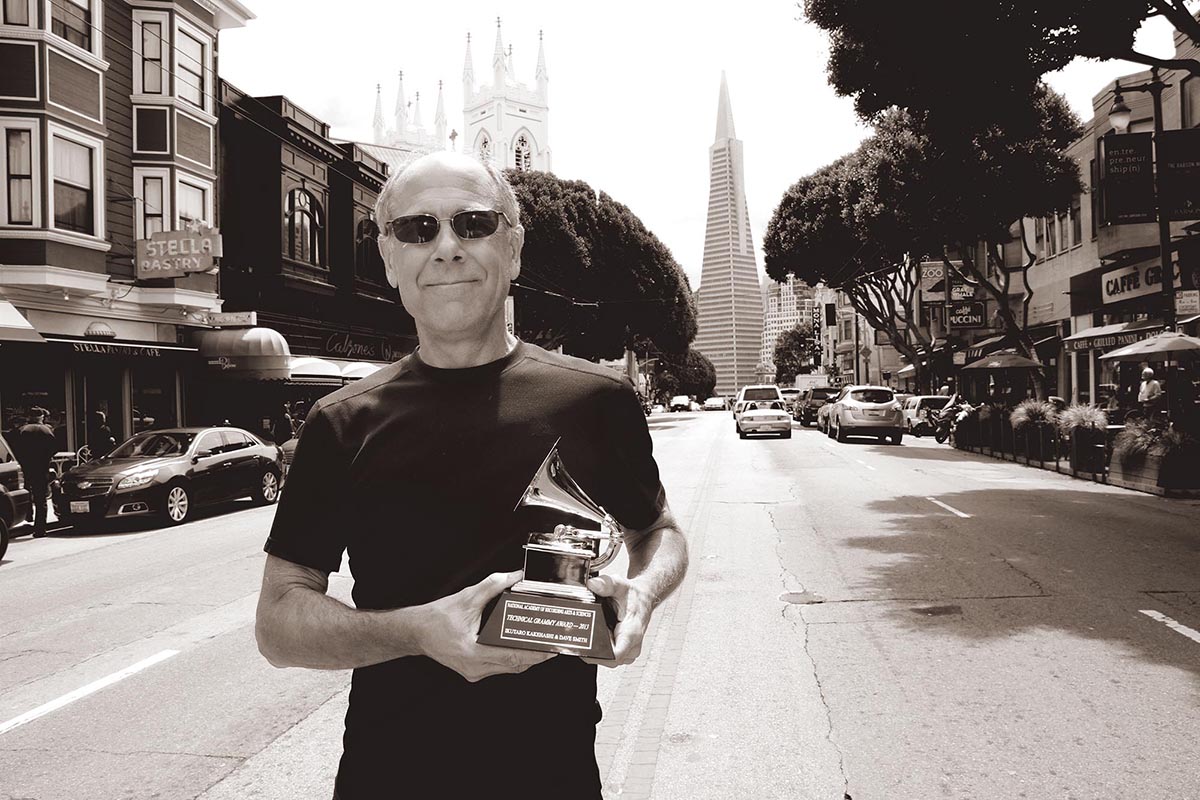 Sequential was founded led by legendary instrument designer and Grammy-winner Dave Smith. In 1977 Dave designed the Sequential Circuits Prophet-5, the world’s first fully-programmable polyphonic synth, and the first musical instrument with an embedded microprocessor. Sequential released many innovative instruments and drum machines over the next 10 years.

Dave was the driving force behind the MIDI specification in 1981. It was Dave, in fact, who coined the acronym. In 1987 he was named a Fellow of the Audio Engineering Society (AES) for his continuing work in the area of music synthesis. After Sequential, Dave was President of DSD, Inc, an R&D division of Yamaha, where he worked on physical modeling synthesis and software synthesizer concepts. He then started the Korg R&D group in California, producing the Wavestation and other technology.

He took over as President at Seer Systems and developed the first soft synth for Intel in 1994, followed by the first professional soft synth, Reality, released in 1997.

Realizing the limitations of software, Dave returned to hardware and started Dave Smith Instruments, starting with the Evolver hybrid analog/digital synthesizer in 2002. The product lineup grew to include many acclaimed instruments including the Prophet-6, OB-6 (with Tom Oberheim), and Tempest drum machine (with Roger Linn).

Today, Sequential’s talented and dedicated team of designers and synth fanatics continue Dave’s legacy in accordance with the spirit of innovation and ingenuity Dave embodied and imparted during his lifetime.

A LEGACY OF MUSICAL INNOVATION

Presented here are some of Sequential’s groundbreaking historical instruments and some of the technologies that they introduced.

The Model 600 was Dave Smith’s first-ever music product, a 16-step analog sequencer, born out of Dave’s desire to create a sequencer for his own Minimoog. A handful of these devices were sold to electronic music labs, and thus began Sequential Circuits.

The Model 800 was a digital sequencer capable of storing 16 banks of 16-step sequences for a total of 256 notes. It featured both real-time and step input.

The Model 700 was a sound programmer for the Minimoog and ARP 2600. It could store a total of 64 programs in 8 banks of 8 programs.

The Prophet-5 was the world’s first fully-programmable polyphonic analog synthesizer. It was also notable for being the first musical instrument with an embedded microprocessor. It was in production from 1978 to 1984 and was embraced by musicians of every genre. The Prophet-5 set the standard for programmable poly synths. Even today, virtually all poly synths can trace their designs back to this ground-breaking instrument.

The Prophet-10 was essentially two prophet-5 synthesizers combined into a single instrument. It offered 10-voice analog polyphony, a dual-manual keyboard, and cassette interface for patch storage and loading. It also included a powerful polyphonic sequencer that was capable of storing up to 6 separate sequences and a total of 10,000 notes. See the Poly-Sequencer below for more details.

The Poly-Sequencer was a self-contained sequencer for the Prophet 5. It was capable of storing up to 6 separate sequences and a total of 10,000 notes. It featured both real-time and step recording, sequence overdubbing and transposition, and an external clock input for synchronizing with other instruments.

The Pro-One was Sequential’s first mono synth. In most respects, it was a single voice from the Prophet-5, but also featured its own sequencer and arpeggiator. The Pro-One was a hugely successful instrument and has found its way onto countless recordings, both at the time of its release and even today.

In 1981, Dave and a small number of forward-looking designers became concerned about the lack of compatibility between synthesizers from different manufacturers. Later that year, Dave formally presented a paper at the Audio Engineering Society (AES) convention in New York proposing the USI (Universal Synthesizer Interface) as a possible solution. He then organized a meeting of all keyboard manufacturers at NAMM in January 1982 to further pursue the possibility of a common interface. After being greeted with disagreement and resistance from many manufacturers, Dave met with four companies: Roland, Korg, Yamaha and Kawai. Together they refined the design specification during 1982. The result was a new standard interface, coined by Dave as MIDI (Musical Instrument Digital Interface). The Prophet-600 was the first-ever MIDI product, shipped in December 1982. At the January 1983 NAMM show, a Sequential Circuits Prophet-600 and a Roland Jupiter 6 were successfully connected and performed together. Today, over 30 years later, MIDI is used everywhere, every day, and is still at version 1.0 — no small feat in a world of constantly evolving technology and rapid obsolescence.

The Prophet-600 was the first MIDI-equipped instrument. It featured a voice architecture similar to the Prophet-5, as well as a built-in arpeggiator and sequencer.

Pro-FX was a sophisticated, expandable, programmable multi-effects system. It was capable of storing up to 64 programs, and its System Controller could support up to 30 modules. Modules included a phase shifter, distortion, a 4 x 2 expandable mixer, 2-band parametric EQ, reverb, transpose/sync, flanger/chorus, and digital delay. A notable feature was a glide function which transitioned smoothly between effects settings. This was very innovative for its time and is even now a rare and desirable feature on high-end effects devices.

The Prophet T8 featured 8-voice analog polyphony, a 76-note wooden keyboard with velocity sensitivity (derived from optical sensors on flying hammers) and polyphonic aftertouch. New England Digital purchased the keyboards for their Synclaviers, and the T8 is still prized today by musicians for its exceptional feel.

Drumtraks was the first MIDI-equipped, sample-based drum machine. It featured 12-bit samples, 12 voices, 13 individual drum sounds, 100 patterns, and 100 songs. Each of its 13 different drum sounds had its own programmable tuning and volume controls. It provided six independent audio outputs, plus a mono mix output, and a cassette interface for program storage.

The Six-Trak was the first MIDI equipped, multitimbral analog synthesizer. It featured 6 voices, 6-part multitimbral operation, a 6-track sequencer, and an arpeggiator. It was also one of the first MIDI instruments designed to be used with a computer — in this case, the Commodore 64. The software allowed voice and sequencer programming and storage.

The Prophet 2000 was a 12-bit sampling keyboard. It featured 512k of sample memory, and selectable sampling rates of 16, 32, and 42kHz. External storage was provided via floppy disk. The Prophet 2000 featured MIDI, 8 voice polyphony, and an arpeggiator. Its analog filters and VCAs gave the Prophet 2000 a warmth that differentiated from other samplers of the period.

The Prophet VS introduced a revolutionary new type of digital synthesis called vector synthesis. With four digital oscillators per voice and 127 waveforms to choose from, the VS allowed players to dynamically crossfade between the oscillators in real time with a joystick. The sonic results were complex, evolving textures unlike anything heard before or since, making the VS an instrument that remains in high demand even today. The Studio 440 was the first integrated music production system, combining sequencing, 12-bit sampling, and a drum machine. Like many of Sequential’s instruments, it was ahead of its time and introduced several innovative technologies of the period, including MIDI output from the sequencer and SCSI ports for data storage on external hard drives. The Sequencer allowed storage of up to 50,000 notes on 8 separate tracks and included a swing function, which was a first for its time.

The Prophet-3000 rack mount sampler was Sequential’s final product and the most sophisticated sampler of its time. It provided 8-voices and 2 MB of stereo, 16-bit sampling at 48 KHz. It was notable not only for its sophisticated, built-in sample editing and auto-looping capabilities, but also for its exceptional sound, which was warm, full, and punchy. It also included a remote LCD display to facilitate sample editing and interaction with the system. It featured external SCSI hard drive support, optional memory expansion, dynamic voice allocation with 8 individual outputs, and a master stereo output. Sound on Sound magazine has called the Prophet-3000 “…a truly revolutionary instrument… from one of the most innovative companies to have ever manufactured musical instruments.”